Over its more than three decades, the Costume and Textile Association has donated thousands of pounds to the Norfolk Museums Service for the purchase and conservation of special items. It has also been responsible for giving, or promoting the giving of many more items to the collection.

Among the major funding projects are the conservation of a shawl counterpane, the purchase of a Norwich shawl, and donations to the creation of Lady Paine’s bedroom at Strangers’ Hall and the restoration of the Jacquard loom at the Museum of Norwich.

Here are some more details about the items which you, through the C&TA, have enabled to be preserved in the collection. 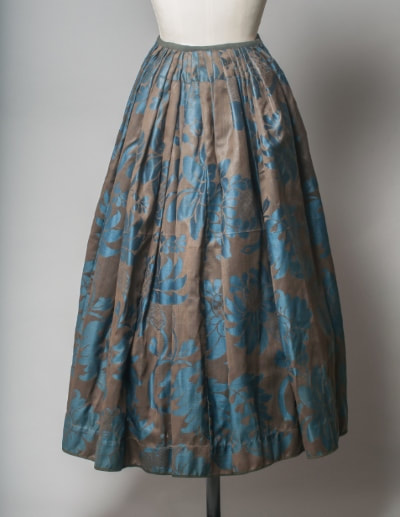 Bovenrok skirt
This is a skirt made from highly glazed satin damask woven with a large pattern of flowers in blue and brown; designed to be worn over panniers and undergarments with layering to achieve a voluminous bell shape.

It was worn by wealthy Dutch gentry and yeoman farmers' wives in North Friesland.

The main source of the worsted version of these patterns was Norwich, where expertise existed not only to achieve complicated designs on a draw loom but also to carry out hot pressing to achieve a high sheen on the fabric, to give the appearance of silk. 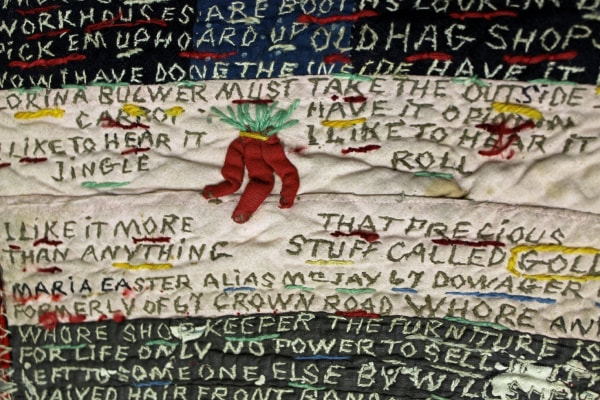 Long sampler made by Lorina Bulwer
This takes the form of a long embroidered  letter, with references to Lorina's life throughout.

At the time of stitching the sampler in 1900, Lorina Bulwer was resident in the female lunatic ward of Great Yarmouth workhouse. It contains over 1600 stitched words along with items including a small bunch of appliqued carrots with the words: 'I LIKE TO HEAR IT JINGLE I LIKE TO HEAR IT ROLL I LIKE IT MORE THAN ANYTHING THAT PRECIOUS STUFF CALLED GOLD'. (NWHCM : 2014.29.1)

Small sampler made by Lorina Bulwer
This includes two male figures facing each other and stitched upper case text surrounding them. Lorina Bulwer made this sampler around 1907.

​The samplers came to light after one owned by the Norfolk Museums Service featured in a television programme - and were recognised by the then owner who offered them to the museums service. 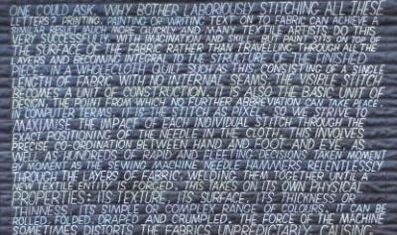 This work was inspired by samplers made by Lorina Bulwer and Elizabeth Parker. 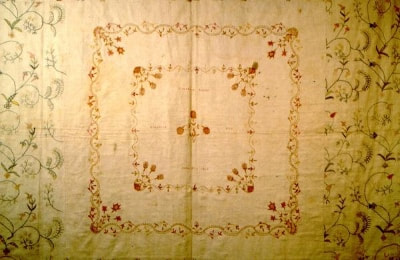 Conservation of the Newgate quilt, a bedcover made under the direction of Elizabeth Fry by women prisoners in Newgate.

Elizabeth Fry (nee Gurney) was born in Gurney Court, off Magdalen Street, Norwich,  to a Quaker family. Her family home as a child was Earlham Hall, Her father, Joseph Gurney, was a partner in Gurney's bank.

Prompted by a family friend, Elizabeth Fry visited Newgate prison. The conditions she saw there horrified her. ​She returned the following day with food and clothes for some of the prisoners.

She was unable to further her work for nearly four years because of family financial difficulties, but returned in 1816 and was eventually able to found a prison school for the children who were imprisoned with their parents.

She began a system of supervision and required the women to sew and to read the Bible. In 1817 she helped found the Association for the Improvement of the Female Prisoners in Newgate.  (NWHCM : 1946.110.1) 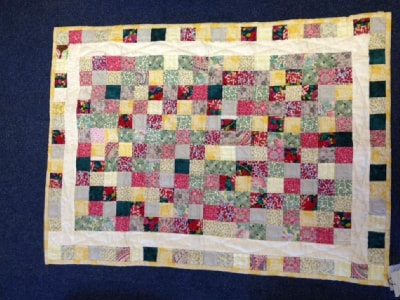 In a modern take on Elizabeth Fry's pioneering work in prisons, the charity Fine Cell Work's volunteer-led workshops teach the craft to prisoners and supply them with the materials that they need.

The prisoners are paid for their work, which is then sold around the world as well as to organisations such as the V&A and English Heritage.

Craftwork in prison can help prisoners discover a more constructive and reflective side to themselves. 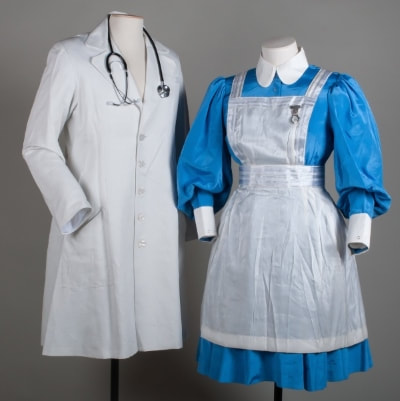 Olympic costumes worn by volunteers who performed at the opening ceremony of the London 2012 London Olympics.

The ceremony, directed by Danny Boyle, interpreted the economic development of Great Britain from an agrarian society of the late 18th century, through industrialisation in the 19th century to the digital age of the 20th and 21st centuries.

The clothing from the ceremony in this collection was dispersed through Oxfam shops and spotted by curator Ruth Battersby-Tooke, who asked the C&TA to fund the purchase. It includes these uniforms from the NHS section, and several other items. 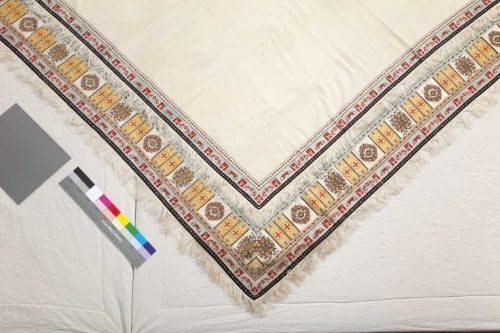 Cream twilled wool ground with two wide and two narrow borders in silk and wool, featuring different patterns. The deeper border incorporates classical wreaths in green, red and gold alternating with pairs of Christian crosses, from the 1830s to 1840s.

Given the name "the Bishop's Wife's shawl" by Judy Wentworth, who suggested it might have been a special commission rather than a manufacturer's novelty.

This is one of several shawls bought for or donated to the museums service by the C&TA. 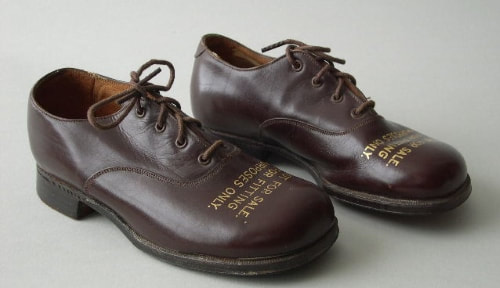 Practical help for the operation of the Costume and Textile department has included £2000 for the 1994 Style & Splendour exhibition and book The Norwich Shawl, and a contribution to the Norwich City exhibition in 2001-2.

Over several years books have been bought for the Shirehall library, and in 2009-10 £14000 was given to provide shelving. Mannequins and a camera were also on the shopping list.

The C&TA Talking Shoes exhibition in 2007 led to several items being donated to the collection by their owners (see left), and the C&TA has itself given items from its own resources collection to the museums service.​